Blog - Latest News
You are here: Home / HC3 Blog / Emergency Preparedness / Turning Lessons from the Past into Tools for the Future: Strengthening...
Written by: Missy Eusebio | Knowledge Management Intern on November 16, 2016

Public health emergencies are increasing in frequency, intensity and complexity and we know that SBCC has an essential role to play, yet it is often an afterthought, resulting in missed opportunities to stop disease outbreaks in their tracks. The global emergency response is also struggling to move beyond immediate emergency relief and address the underlying development issues. Coordination between the humanitarian sector, the development sector and the communities suffering through these crises is not yet systematic.

To catalyze a dialogue on the power of SBCC in emergencies, HC3 developed a preliminary framework, The Emergency Helix based on HC3’s work on Ebola and Zika. Kirsten Bӧse, HC3 Project Director, said in her opening remarks “The Emergency Helix offers a pathway to a better response by taking into account these many critical issues in a health emergency situation.” This morning event was the formal start of expert discussion on the framework and an opportunity for attendees to contribute to it.

The audience was led through the framework and information-packed visual by Claudia Vondrasek, Team Lead of HC3 Côte d’Ivoire, Guinea and Mali. In the backdrop of the visual, a representation of a disaster curve is set against the phases of a public health emergency (bottom) and the SBCC actions that must be taken in each phase (top). The key concept, however, is the interplay between health systems and the communities. When SBCC is incorporated into the emergency response, the efforts between them are linked and form a dynamic relationship. Like DNA, a suitable metaphor, SBCC forms a “communication backbone that strengthens community stability, health system adaptability and the evolution toward resilience.” To kick off the dialogue, experts from U.S. Centers for Disease Control and Prevention (CDC), BBC Media Action, Population Services International (PSI), UNICEF and Johns Hopkins Center for Communication Programs (CCP) were invited to talk about The Emergency Helix, the role of SBCC in emergencies and what needs to happen moving forward. Molly Gaines-McCollom from the CDC emphasized the pre-crisis phase of the Helix and CDC’s Crisis and Emergency Risk Communication (CERC) suite and the importance of community engagement on the basis that, “the right message at the right time saves lives and protects people.” As the Outreach Team Lead, she expressed a hope to see more community-based exercises, which form stronger strategies and coordination before the onset of an emergency.

Yvonne MacPherson from BBC Media Action, saw The Emergency Helix as an advocacy tool. In a recent policy briefing, BBC Media Action states that investment in global health has increased considerably, but communication investments have not. She cited global fund budgets that invest less than five percent on communication. While some are not aware of the evidence base for SBCC, advocacy for it has fallen short as well. MacPherson finished with a positive outlook, stating, “The Helix beautifully demonstrates the vital link between health systems and communities and shows how communication is so relevant at every stage of the health emergency,” making it a tool to advocate for greater investment.

The Helix beautifully demonstrates the vital link between health systems and communities and shows how communication is so relevant at every stage of the health emergency.

Danielle Lloyd, who was an Ebola Community Action Platform (ECAP) Manager with PSI, described the ECAP approach to collect data rapidly in Liberia with 2,000 smart phones. Though the initiative was for monitoring and evaluation, it was participatory and had a built-in feedback loop. “Listening was incredibly critical in the approach,” she shared, “in hindsight, it really made a big difference.” The challenge of collecting data at the onset of an emergency called for creativity, course correcting and ultimately accepting the data as the “best data… given the circumstances.” An additional, unexpected outcome of phone-based data collection was the formation of a WhatsApp group that harnessed country-wide lesson sharing.

Ketan Chitnis, Communication for Development Specialist at UNICEF spoke to the need for coordination by taking the audience through an emergency scenario. In the context of an emergency, many (perhaps hundreds) of communication experts attempt to provide information to the public. Coordination is necessary to ensure that the messages are consistent and collating the available communication data for daily or weekly reporting at UNICEF’s national operations command center requires coordination. In addition to having a coordinating body, Chitnis called for the need of a simple yet systematic approach. In fact, UNICEF and International Federation of Red Cross and Red Crescent Societies (IFRC) are currently tasked with finding a “systematic approach relatively easy enough for non-SBCC experts” to implement in Haiti.

The final panelist, Issiaga Daffe who was Country Director of Guinea for HC3 (now Country Director in Mali), reflected on a central challenge in the Ebola response in Guinea: fear of infections at the health facilities and mistrust between providers and the communities. In order to bring people back to health facilities, community dialogues were held and proved effective in rebuilding trust. Providers, communities and Ministry of Health authorities came to consensus on the improvements needed around the facilities and empowered community and provider “quality teams” to make sure the concerns were addressed. 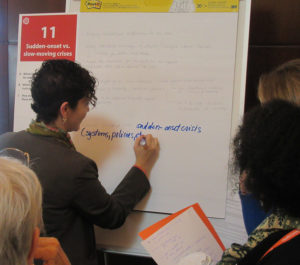 Following the panel, attendees were given the opportunity to contribute through Q&A, comment cards and gallery-style small group discussions. Throughout the event, followers from Guinea, South Africa, Nigeria and Liberia tuned in on Facebook Live and on Twitter. Several themes surfaced, yet the call for community engagement remained loud and clear. Plainly put by Reverend John Sumo, social mobilization lead in Liberia’s Ministry of Health during Ebola, in his video address, “If you want a problem solved at the community-level, involve them.”

Though these rich insights are currently being synthesized and will be used to refine The Emergency Helix, the discussion is far from over. The panelists and small group hosts have been asked to stay engaged on Springboard. Take this opportunity to shape the future of SBCC in public health emergencies by joining the discussion and giving us your feedback.

The final Helix, and supporting case studies from HC3’s work, will be shared in a follow-up webinar in January 2017. Subscribe to the HC3 mailing list to receive notifications about this and other upcoming events.